What if....Rap had given proper credit

It's 1993. Hip Hop is huge.  I'm loving it.  I know I want to be a producer and as I'm loving hip-hop, I am simultaneously falling in love with jazz (thanks to Benjamin Pruitt!)   I get this idea to put jazz with funky beats.  No one is feeling me, although my friends love Gangstarr, who has done it already.
There is a problem.   I don't have any money to get equipment.  Oh well, I'm going to try.  Then as I have my portable FM radio on me riding the Dexter Bus to Northland Mall, I hear this song come on FM98 in Detroit.   I hear this bass player walking a bass line.  NICE!!!! Who is this playing?  Then the drums come in  NICE!!! Then I hear these horns.  YES.  I'm like what am I listening to that is that is sooo smooth.  Then the chorus.
I'm so sold.
The song? Rebirth of the Slick: Cool like that by Digable Planets.  THIS IS A HIT!  I also thought, "This was the music I want to write! I told y'all you could do music like this live!"
Once again the chorus
I see my good friend Kindra Parker who is equally a hip-hop head like me.  I say to her, Did you hear that song on FM98?
She starts singing.
I'm cool like dat, I'm cool like dat
I'm cool like dat, I'm cool
I jump in too.  This is awesome.
I go back on the bus later to Northland and go to Musicland, one of the best record stores later rebranded as Sam Goody.   I can't wait to find it.
Now, I learned how to red from two items: architectural digest and record covers.  I always read the album credits.  I wanted to know who was on every person who created the masterpiece I was listening to.
When you have the single "Rebirth of the Slick: Cool like that), you see this in the credits:
Conceived, freaked, and produced by Butterfly
Written and made lovely by all of the insects of digable planets.

So at this point, I'm thinking they had some live bodies in the studio.  Why? Well, that's how I made music at the time.  So I thought everyone did that.
Then later I found out the truth: they SAMPLED.
What if you bought the single or full album and it said this instead.  Nope.
Even on the vinyl, there is no mention of the sample origins. 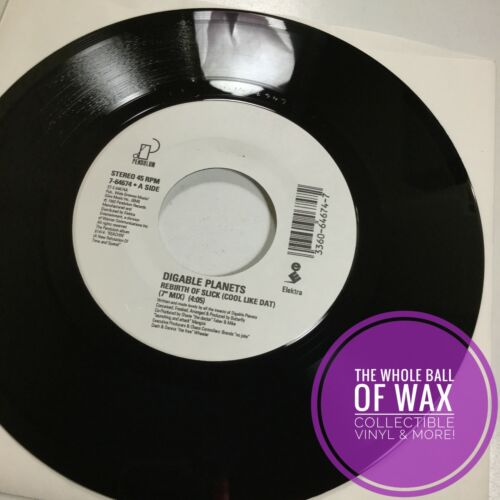 I had no idea that it was a sample and it's wrong that the composer didn't get his credit. Mind you, I'm 15 years old at this time. I'm still trying to understand what sampling was.  Being a young classical and jazz musician, this idea of sampling was foreign to me.  What about the musicians? They are the ones that made the music?   Now, this isn't to cast aspersion on Digable Planets.  They are wonderful and I still bump their music regularly.   AND, this problem isn't on them, it's on the label and producers (Pendelum and Elektra.)  Then around 1995, I had learned that many (which is an understatement) songs hadn't been cleared.
Just for clarity, sampling is when you take an a portion of the actual source  of a recording (whether analog or digital) and use it in a project. It is different from recreation or interpolating, which is when you literally perform another's person creation or sing/play a portion of a song respectively.
This came to a head about three times when the great James Mtume had some interesting words about sampling.  If you don't know who Mtume is, let's just say he has had arguably four great careers in music.  We can start that he was a percussionist with Miles Davis.  That automatically makes him a legend.
The his own band, Mtume, had hits. Yeah, that song Juicy Fruit, that's him.
Third, we can take about as a songwriter and producer for other people.  How about "The Closer I get to You" or  "You know how to Love Me." He also scored "New York Undercover."  The fourth career is how coincidently about how his music has been a lifeblood for hip-hop.
So Mtume lambasted producers on a radio show "Open Lines" for being lazy which garnered a nice attack by rap group Stetsasonic called Talking All that Jazz.  Now what is interesting about this:  They MISSED Mtume's main point was to give PROPER credit to the people sampled and PAY the people who's music which conveniently gets lost in the sauce.
So now, what if....a big what if......
What if Rap had given proper credit when they originally started sampling. What I mean by "proper" is that they gave credit to Everyone. What if they adequately and accurately cited the songwriters and musicians?  I dare say, we would look at the music differently. WAAAAAYYYYYY differently.   We would recognize the performers of the sampled and they would get their due!   Mtume has said MANY composers did not get paid and lost out on  millions of dollars.

Then the question must be asked: How did the unjust due start?  Well, that is a looooong conversation.  I think a better way to have this conversation is to look at Rap/Hip-Hops fun history.  See, rap started off in its early form by DJs.....well ,ONE Dj (Kool Herc) prolonging jams by buying two of the same albums and playing the breaks, going back and forth to keep the party going.  This technique kept going and eventually, people started to rap over these extended breaks.   These breaks were usually found on the 12" versions of singles.  Now people started looping these breaks and rapping over them.  Thus is born Rap Music.

With this type of simple beginnings, it became easily approachable.

So as people started recording over these loops and breaks, no one thought over the legal repercussions. An essential loophole (or so they thought) was how sampling was not included in the copyright language of the time especially with digital recreation. Remember, just like Apple's Garageband can have the average joe make a song, these were just regular people having fun and saying stories/poetry over prerecorded grooves.  All you needed was a turntable and a mic.

So did the authors of the music own the rights when someone put the actual recording in their music?  Oliver Wang wrote beautifully on this matter:

When sampling technology and practices became hip-hop's musical blueprint in the late 1980s, the business and legal rules were a thoroughly gray area. Since the techniques created digital copies of source material, copyright holders could argue that unauthorized sampling violated their intellectual property. Those doing the sampling could argue they were repurposing fragments of recorded music to create something entirely new. Up until 1991, disputes around whose argument carried more weight tended to be settled outside of court.

Per usual. technology comes faster than the law. Similar thing happened when VHS came out.  Movie companies at first blocked it. Now movies like Frozen and Avatar have sold over 7 million DVDs and BluRay.  Let's just say the companies have changed their mind!  So now the court has to determine this gray area about sampling.  Oops.

Now back to Cool Like That.  There is another problem.
THIS SONG WON A GRAMMY!!
And it should have.  YES, the song is amazing,  It is a Classic.
This isn't an attack on rap, DP, or even sampling itself.
HOWEVER, when a song wins a Grammy, the musicians on that song get it.  Wait a minute, the musicians from the sample should get it too!!!  And the person who wrote the sampled song didn't even get credit.
So what is the song?  Stretching which was composed by James Williams on the 1978 album Reflections in Blue by Art Blakley.   It's a fiery song in Bminor that is in Blues form, but doesn't quite follow traditional blues progressions. Featured on this song is Bobby Watson, someone I came to know while I lived in Kansas as he is the former chair of Jazz Studies at the University of Missouri Kansas City,
Rebirth of the Slick: Cool like that is an amazing composition and recording.  It deserves everything it has earned.  It still resonates with my generation.  Right is right and wrong is wrong however. THIS was the original point of  James Mtume criticizing sampling.  Have integrity. PAY the people of the music you sampled.  Now, perhaps they did pay James Williams.  I don't know.  Mr. Williams has passed on.  When I talked to Mr. Watson, he said he was unsure.  What is crazy is as bug as that song is, NO ONE KNOWS WHO PLAYED THE HORNS ON  THAT!   The composer of the sampled song and the band needs their due.  Musical Integrity needs to prevail.  Pendulum and Elektra Records should have known better.  For that matter, ALL of the uncredited sampled song need their due. But for now, let's fix the aforementioned problem. Give these people their Grammy.  If they hadn't made the song, there is no "COOL LIKE THAT!"   Let the credits from this point read:

Now we see the full music greatness of this composition.  We see LIFE.  We can read about the great musicians who are on this song!
Just for the fun of it.  How about we take a few other song and give proper credits/citations of AL the players.  These songs were CLEARED FYI: however, I just want to show you the musical depthness of these songs if they were to list all of the performers and include the songwriters.